Popular on IC: Okta upgraded to Buy from Neutral at BTIG...

The BEA released the Personal Income and Outlays report for January: 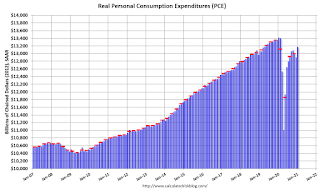 The dashed red lines are the quarterly levels for real PCE.

Personal income was at expectations,  and the increase in PCE was slightly below expectations.