Popular on IC: Charged: Xpeng planning to go beyond cars as Hertz places......

Mortgage applications increased 0.2 percent from one week earlier, according to data from the Mortgage Bankers Association’s (MBA) Weekly Mortgage Applications Survey for the week ending October 8, 2021.

Added Kan, “The 30-year fixed rate reached 3.18 percent last week and has risen 15 basis points over the past month, resulting in an 11 percent drop in refinance applications during this time. Government refinance applications fell over 3 percent last week, driven by a decline in FHA refinances and an 8-basis point increase in the average FHA mortgage rate. We continue to expect weakening refinance activity as rates move higher and borrowers see less of a rate incentive.”
...
The average contract interest rate for 30-year fixed-rate mortgages with conforming loan balances ($548,250 or less) increased to 3.18 percent from 3.14 percent, with points increasing to 0.37 from 0.35 (including the origination fee) for 80 percent loan-to-value ratio (LTV) loans.
emphasis added 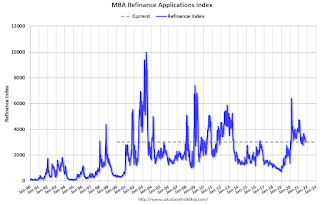 
The first graph shows the refinance index since 1990.

With low rates, the index remains elevated - but the recent bump in rates has slowed activity. 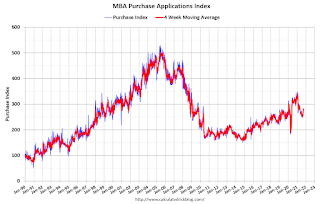 According to the MBA, purchase activity is down 10% year-over-year unadjusted.

Note: The year ago comparisons for the unadjusted purchase index are now difficult since purchase activity was strong in the second half of 2020.


Note: Red is a four-week average (blue is weekly).